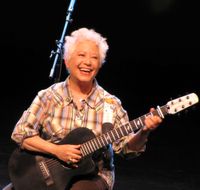 Now in her fifth decade of writing songs and performing, Janis received her most recent Grammy nomination in 2016 for the self-produced “Patience & Sarah”, an audio book she produced and co-narrated with the actress Jean Smart (“Designing Women”.) This makes a total of 10 nominations in 8 different categories, a record for a solo artist whose first nomination came at the age of 16 for her debut album, “Janis Ian”.

She lost this last Grammy to President Jimmy Carter, but two years earlier she’d received a Grammy for “Society’s Child: My Autobiography”, winning Best Spoken Word over stiff competition (President Bill Clinton, First Lady Michelle Obama, Rachel Maddow, and Ellen DeGeneres.) Accepting the award to a tumultuous standing ovation, Ian quipped “Well, this is a stunning upset… and I have to admit that when I saw the list of nominees, my first thought was ‘There’s got to be a joke in here somewhere. An ex-president, a First Lady, and three lesbians walk into a bar…’”

On a more serious note, Ian said “We artists are the last alchemists, pulling your dreams, your hopes, your deepest desires out of thin air. We turn them into something you can hear, and play.