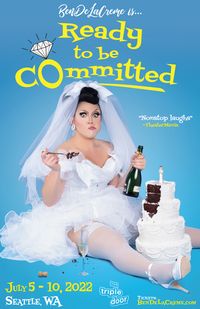 BenDeLaCreme is...Ready to be Committed

Sweet as pie and sharp as cheddar, the Terminally Delightful BenDeLaCreme is known for combining her background in performing and visual arts with a love of spectacle, glamour, and Saturday morning cartoons. She has dazzled crowds throughout the Americas, Europe, and Australia, premiered four critically acclaimed solo shows off-broadway, as well as written, directed, and produced myriad narrative works and variety spectaculars that have played to sold-out audiences for over a decade.

BenDeLaCreme has appeared on two seasons of the Emmy award-winning “RuPaul’s Drag Race,” her first go-round securing her a spot among the show’s “15 Fan Favorites of All Time.” After being crowned “Miss Congeniality” on Season 6, she returned to compete on the third season of “RuPaul’s Drag Race All Stars” on VH1 where she garnered more challenge wins than any other competitor in the show’s history, among other series records.