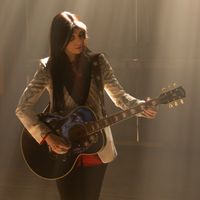 Moved and inspired by artists such as Bonnie Raitt, Linda Ronstadt, and Janis Joplin, Lauren Monroe developed a style producers, musicians, and rock historians have compared to those legendary women of rock and blues. Her sound and vocal quality — raw, sawdust-on-the-floor honesty — combined with the emotional and spiritual power of her performance draws audiences in, invigorates, and speaks to us on so many levels.

Lauren’s second solo album Under the Wolf Moon, produced by Jim Scott, was released in February 2021.

"Monroe leaves her mark with an arresting and dynamic collection of reflective songs built on sturdy grooves, a sparkling melodicism and deep well of thoughtful lyrics that resonate, delivered by her strong and impassioned voice, which draws comparisons to Shania Twain meets Sheryl Crow plus a whole lotta Lauren Monroe.