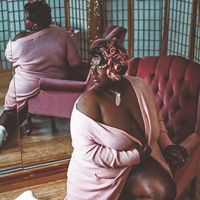 Created by the founder of What the Funk?! An All BIPOC Burlesque Festival, Mx. Pucks A’Plenty, Fatlesque Fest Northwest is on a mission to thicken up burlesque stages all over the country, starting with The Triple Door in Seattle, Washington.

Mx. Pucks A'Plenty is the Director of Junk in da Trunk, the Michelle Obama of Burlesque, and Seattle's Own Mxtress of Thiccness! They are the #17 Most Influential Burlesque Industry Figure of 2021, as voted for by thousands of burlesque fans and peers worldwide by 21st Century Burlesque Magazine. This roguish radical is always ready to ride whether it be behind the scenes or on stage. Spreading their black queer magic where ever they go, Pucks is always in control. Pucks is also the founder and co-producer behind What the Funk?! An All POC Burlesque Festival and is the co-producer behind Identities and Expressions: A Virtual Trans & Nonbinary Performing Arts Festival.